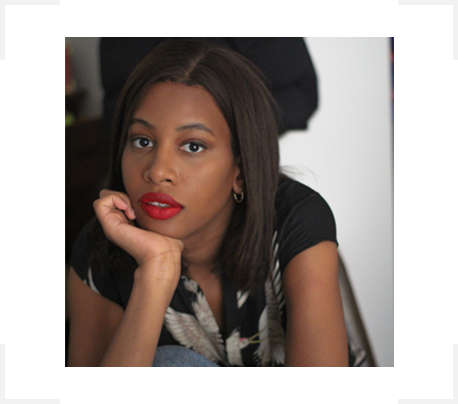 Nyala Moon is an actor, writer, and filmmaker of trans experience. She is a graduate of Baruch College. Nyala is a New York native with southern roots. Nyala has had a love affair with cinema but she didn't think she could pursue her dreams. After working in the professional world for three years and needing a creative outlet. Nyala started taking LGBT acting classes at the Studio Act with Brad Calcaterra. From there she realized that her true calling was to pursue her passions for filmmaking by telling stories about her community. In early 2017, Nyala produced her first project, NOVA, a short film about black trans women exploring the intersections of her life. In fall 2017, Nyala directs and produced with Ariel Maher and Laquisha Jones, Bad Ally, a web series between a black writer and a non-binary actor. Nyala also made her second film short film, Two Trans Women in 2017. Nyala was also a contributor for the anthology, Written on the Body: Letters from Trans and Non-Binary Survivors of Sexual Assault and Domestic Violence by Lexi Bean. When Nyala isn’t studying and making films, she is watching anime, playing her guitar badly, and being a mom to her plant. Instagram

On the outside looking in no one can explain why their relationship works. Bill a charming fuck-up and Sara being wound too tight. However, those differences have always been what made their relationship work. On the most imitate level their relationships have been anchored by a deep understanding and acceptance of each other’s true selves. Sara has almost reached her dream to match her body to her soul but first, She and her drug-dealing boyfriend, Bill, have to re-up one last sell.